In short: The ancient city inside the city wall retains a fascinating atmosphere. Its great monuments on the outskirts, such as the Terracotta Warriors, are among China’s favorite attractions.

Xian is undoubtedly one of the most charismatic cities in China. Capital of twelve dynasties, political center of China during the centuries of its greatest splendor, starting point of the Silk Road, it could be considered one of the most important cities in the history of mankind. And indeed, while the suburban districts surrounding Xian are full of historical relics; the city itself, despite successive destructions and reconstructions over the centuries, has managed to retain a dynamic and cosmopolitan air, without however departing from the daily life of this peasant and merchant China in which it is immersed.

Xian, capital of the province of Shaanxi, is, with its three million inhabitants and another three million on the periphery, the economic, industrial and cultural center of the northwest region of China. Its universities are among the most important in the country. Some of China’s leading technologies, such as aviation and satellite tracking, are developed in its institutes and factories. However, despite having participated, like the rest of China’s cities, in the wave of great changes experienced in recent years, Xian has been able to assimilate progress without losing its style, harmonizing, as far as possible, the new constructions in its secular urban structure.

It is difficult to define the charm that Xian inspires, but there is no doubt that its people, its streets, its ancient buildings, have something special that has made it one of the most visited cities in China.

The terracotta warriors are the star attraction of Xian. It has three main pits.

Pit Number One is the largest and most important (it has the most warriors). It contains no less than 6,000 terracotta (terra cotta) warriors and horses, life-size and in battle formation, in a pit 210 meters long by 60 meters wide. The soldiers are life-size, with an average height of 1.80 meters, each with his armor. The heads and hands were molded separately and then added, when they were buried they were colored, color that has disappeared with the passage of time, and the surprising thing is that in addition to the mastery with which they are built, each soldier has different characteristics and different expression. Some have a mustache or a ponytail. Some are Han, others belong to the northern peoples. They have the characteristics of their rank in the army, and even the expression on their faces makes it possible to distinguish the veterans from the youngsters. Each of them carried their corresponding weapons in their hands: swords, spears, javelins, bows.

Pit Number Two was the last to be opened to the public, in 1995. And for me, it is the least interesting. In it, there are about two thousand terracotta warriors. But most of them are still unrestored, so one sees one head there, one leg there. The pit was supposed to show visitors how the excavation and restoration work is going on, but there are few people working there. The most interesting thing in this room is the half dozen terracotta figures, some of the most important in the history of this monument, which are displayed in the side aisles, protected by glass. It is the best opportunity that is found throughout the visit, to see them in detail.

Pit Number Three. Smaller. It has only 69 figures of officers and generals, they say it was the headquarters and four precious horses. When it was opened, a few years ago, the figures still had some color reflection, but it has disappeared.

It is located inside the Grace Monastery, about four kilometers away from the southern wall of the city. Built by Emperor Gao Zong of the Tang dynasty in 648 to preserve the 657 volumes of Buddhist scriptures that the monk Xuan Zhuang brought back from his journey to India, it became the most important translation center of the time.

Half a kilometer in the direction of the city center is the Small Goose Pagoda. It is said that the names of these two pagodas refer to the two schools of Buddhism: known as the Great Vehicle and the Small Vehicle. The latter was built in 709, inside the Jianfu Temple, and its basic structure has remained intact to this day. 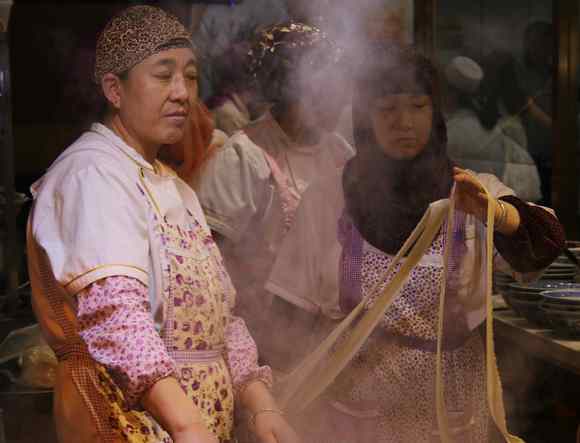 A few hundred meters away from the Small Goose Pagoda, is the South Gate of the Xian Wall. Surely the most important. The Xian Wall was built during the Ming dynasty, between 1374 and 1378, over the ancient Forbidden City of the Tang. It is a rectangular wall with 3.4 kilometers from east to west and 2.6 from north to south. It is twelve meters high and its width at the base varies between 15 and 18 meters, and at the top between 12 and 14 meters.

The Bell Tower, built in the Ming Dynasty, is the symbol of Xian. It is 36 meters high and is the geographical center of the city. From it emerge the four main streets: North Great Street, South Great Street, East Great Street, and West Great Street. Formerly it was used to mark the hours. In the morning the sound of its bell marked the time to start daily activities and to open the gates of the city.

Built in the year 742 to meet the religious needs of an increasingly important Muslim colony in the area, it is a good example of the fusion between Chinese and Muslim architectural styles, since, although the construction is externally Chinese, and its appearance is that of a Chinese monument, the internal structure, engravings, and symbology, clearly show Muslim influences. Another example of this fusion is discovered in the Main Hall, where there are numerous inscriptions in Arabic, but arranged as Chinese characters. It is possible to visit the entire enclosure, where children from neighboring houses are always playing, except for the Prayer Hall, reserved for the believers.