Travel to Guilin and enjoy China’s most beautiful landscape

Why must you travel to Guilin?

Guilin is one of the most touristic cities and therefore one of the most visited. Most international tours include a stop in Guilin, at least the time to take the famous Li River cruise, and among domestic tourists, everyone is eager to see, at least once in life, the famous landscapes they have studied at school: the Elephant Hill, the Li River Mountains, and see for themselves the reasons why poets, since ancient times, stated: «The landscape of Guilin is the first under heaven».

The most beautiful city in China

Guilin is the most beautiful city in China. So say the proverbs, and so it has been considered since ancient times. All poets and painters have made pilgrimages to Guilin, capturing its wonderful scenery on canvas and in poems. Those whimsically shaped hills lost in the clouds, characteristic of Chinese paintings, are not the product of the artist’s imagination, but the landscape of Guilin. In fact, from any point in the city you can always see the magnificent hills that surround it. Any walk ends in the water, or in the mountains. Mountains and water, the two concepts that define a landscape in Chinese, are ubiquitous in Guilin.

A city to relax

With the above, many travelers will already be thinking that Guilin is another one of those «hot spots» that are best to stay away from. Well, no, they are wrong. Despite its fame, despite being included in so many travel programs, Guilin is a quiet city, and on many occasions the traveler will even miss a little more animation. In recent years there are two or three hours in the evening during which the pedestrian street Zhengyanglu, is full of people, which is normal for a commercial street, and is part of its charm, but the rest of the day tranquility is the norm.

One can approach the riverbank, right in front of the Sheraton, the most central part of the city, and watch groups of citizens dancing, performing taiji exercises or other fitness activities. One can stroll along the Ronghu and Shanhu lakes (in the center of the city) in absolute solitude, and excursions can be made to the city’s most famous parks without seeing more than the few locals who enjoy them during the day.

A city of tropical animation

The tranquility of Guilin, which in fact makes many travelers spend their entire vacation in the city making from there sporadic excursions to some of its most attractive landscapes, combines perfectly with an animation that I like to call tropical, because Guilin is a small city, and although in recent years its suburbs have grown a lot, its inhabitants are used to spend a lot of time in the street.

That gives it an extra animation for the traveler, who finds before him a city where the night never seems to end completely, where there is always a restaurant open for a second dinner or a new beer. The continuous nocturnal activity of the people gives Guilin that charm of the tropics, that mixed and ambiguous air, that passion for life characteristic of young cities, as if each and every one of its inhabitants were forced to go out, to live, to let themselves be seen.

Another city with a millenary history

Yes, Guilin, like many other cities in China also has an ancient history. It was founded more than two thousand years ago, and for many centuries it was the capital of Guangxi province, the seat of administrative and military power and the center of Chinese civilization. Unfortunately, there is hardly anything left that bears witness to those glorious times, because during World War II the city was heavily bombed by the Japanese, especially the most representative buildings, the center of power. Only an old gate of the city wall remains, next to Lake Ronghu, and in the new area south of the Wave Breaking Hill, carefully reconstructed to imitate an «imperial» style of its own, the remains of some old buildings.

In the center of an area populated by minorities

During the imperial period, from Guilin, the imperial rule spread among the peoples who inhabited the surrounding lands: a mountainous territory, generally not very productive, from which the emperors only demanded an oath of loyalty, the promise (often demanded) to provide soldiers for military campaigns, and an annual tax that usually consisted of some of the exotic products of the area. 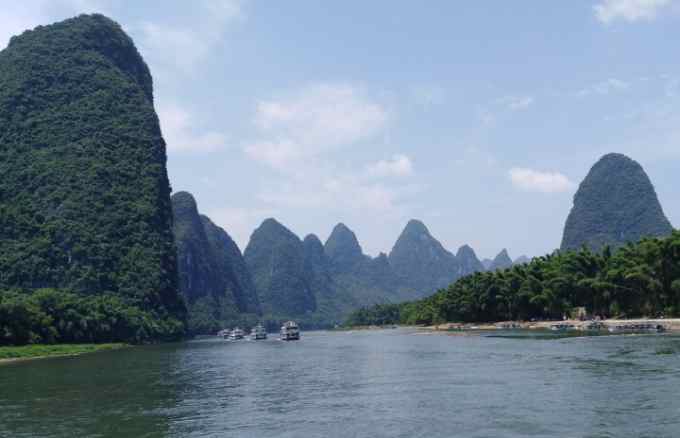 Otherwise the aboriginal peoples continued to live their lives under the rule of their leaders, called in Chinese tusi, or local rulers. This is why even today, Guilin is still one of the few Chinese provinces that is actually an autonomous region (a region with a significant percentage of minority population). The Guangxi Zhuang Autonomous Region. This tells us that the Zhuang are the most important of the minorities, but you can also see people from the Yao, Dong, Miao, etc. minorities.

With so few historical remains, Guilin’s attractions are related to its landscapes, and those that can be seen outside the city combine natural scenery with the human environments characteristic of the area. In the city itself the Reed Flute Grotto is the most famous attraction: a large grotto with whimsically shaped stalactites and stalagmites and a series of impressive halls or palaces. In the center of it, the Crystal Palace shows a beautiful city landscape reflected in a lake. The Wave-Breaking Hill provides magnificent views of the city, and its lower part has Buddhist sculptures.

Elephant Hill, named for that shape, is difficult to see from the street, and you have to pay a rather expensive entrance fee. It is more comfortable and cheaper to have a coffee in the penthouse of the Lijiang Waterfall Hotel overlooking the hill and the river. The Seven Stars Park is the most famous park in the city, and the lakes in the center have a mix of Chinese-style buildings and bridges that mimic the most famous in the world. At night everything is illuminated for viewing from pleasure boats.

The Li River and other wonders

Guilin’s most interesting excursions are outside the city, which is one of the reasons it is so quiet during the day. These include the Li River, where most travelers cruise, with the most spectacular karst scenery in Asia, as well as a number of more or less ancient villages, such as Daxu, once the site of a river market, Yangshuo, near the most spectacular scenery, Xingping, on the banks of the Li River, or Huangyao, an ancient fortified village. In the opposite direction are the mountains of Longshen, with the famous Longji terraces, and a little further away the lands of the Dong minority, with its Drum Towers and its Wind and Rain Bridges.

As we can see, Guilin more than deserves its reputation, and the many travelers who visit it are not disappointed.