The Jinuo, descendants of the uncle

The Jinuo, descendants of the uncle

The Jino, with a population of only 21.500 persons (in 2005) are one of the smallest minorities in China and the last to be officially recognized as such, as they were designated a national minority and granted the special rights allowed by this title only in June 1979, when the State Council considered that their language, customs, culture, economic system, and psychological environment were not shared with other peoples (Zhong 1983: 25; Zhi 1984: 86).

They were formerly known as Youle, for the name of the mountains they inhabit, but after their official recognition both them and the mountains were changed to Jino, the name they call themselves, and their territory called Jinolok. The name Youle (a deformation of the Chinese diaole “lost”) makes reference to the legends that say that they originated in the third century from a group of Zhuge Liang soldiers that overslept and remained lost from the main body of the army. We will study in more detail this legend in the history section.

Importance of the maternal uncle

Regarding the name “Jino” there are two alternate explanations. Some authors say that in their language “ji” means maternal uncle, and “nuo” means “coming next”. So “Jinuo” would mean “descendants of the uncle”, a reference that suggests in the near past they lived in a matriarchal society. The maternal uncle, the main man in a family ruled by a woman, is very important in matriarchal societies and the persistence of the uncles’ power in the family and society life indicates that in the past family power was shared by sister and brother and not between wife and husband.

Even today the uncle holds a very important role in each Jino person’s life. He acts as protagonist in child naming ceremonies, betrothal and marriages; he even has the power to approve a marriage even if it is prevented by the couple’s parents (Bai and Zhang 2000: 32). As a protector of his nephew or niece he can take care of children born before marriage, and assist his nephews in case of weakness and sickness, tying a red string in their wrist to protect them and even chewing the food that they will eat when they feel weak. Others consider that “ji” means crowded and “nuo” means behind, being a reference to the moment when Jino and other peoples came out of the gourd in disorder in mythical times (Zhao 1995: 4).

The Jino only have about 1,300 families, inhabiting about 40 villages (most of them moved in the last years to more accessible localizations) scattered over 3,000 square kilometers up in the mountains (Zhi 1984: 86). Their administrative center is Jinoshan Township, a cluster of new houses and administrative buildings in the most accessible part of their territory, which lies only 100 km away from Laos’s border. It belongs to the Jinghong Municipality in the Xishuangbanna Dai Autonomous Prefecture, Yunnan Province.

Jino Mountain, an area of roughly 70 km from east to west and 50 km from north to south (Du and Yip 1993: 224), constitutes the main territory of Jino minority; a region of subtropical weather with seasonal raining in the wet season, and an abundance of endemic animal and vegetal species. Near the Jino can be found some Yi, Hani and Kongge (one of the not yet officially recognized Chinese ethnic groups) communities, and in the lowlands around them, villages inhabited by different branches of the Dai. The northern limit of their territory is defined by a valley into which the Nanxiaohe and Xiaoheijiang rivers flow. On the south, west and east it borders Mengyang, Jinghong, Menghan, and the Menglun basin in Mengla County. The Mekong and the Xiaoheijiang rivers meander through this basin and they meet right at the foot of the Jino mountains (Yin 2001: 216).

The elevation of Jino mountains ranges from 1,691 meter in the highest point to 550 meter in the lowest. Temperature is pleasant, as the hot weather of tropical Xishuangbanna is cooled by the mountains environment. It ranges from 34.9ºC to 5.8ºC, with an annual average of 18-20ºC. The rainfall amount is 1,580,5 millimeters each year. There are only two seasons in the year: raining season from May to September and a dry season for the other months (Lu and Kang 2006).

Jino Mountain is rich in biodiversity and mineral resources. Forests cover 67.7% of its area, including the tropical rain forest and subtropical green foliage forest. More than 1,000 kinds of trees and 2,000 kinds of plants of economic value are found in these forests. Jino mountains are rich in wildlife; they are the home to more than 100 species of mammals, 36 amphibians, 60 reptiles, 420 birds and 100 fishs, including elephants, wild oxen and a variety of monkeys (Lu and Kang 2006). The biggest elephant’s natural reserve in Xishuangbanna is situated just on the border of Jino territory.

These exuberant natural resources allowed the Jino to survive practicing shifting cultivation, gathering non-timber forest products, hunting and fishing for their livelihood. To get their maximum yields sustainably they developed a unique system through the knowledge of their natural resources and the environment, including the economic value of 252 botanical species (Wang).

From the book: CHINA’S LAST BUT ONE MATRIARCHY, THE JINO OF SOUTHWEST CHINA. Ceinos-Arcones, Pedro. 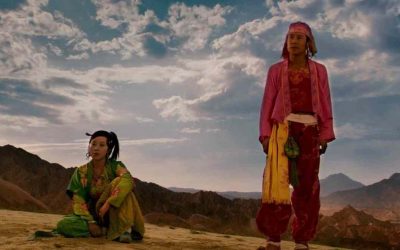 A Woman, a Gun and a Noodle Shop

A Woman, a Gun and a Noodle Shop Directed by Zhang Yimou: 2009. 85. Min. A Woman and a Gun and a Chinese Noodle House is a quite singular work within Zhang Yimou's filmography. His light-hearted style starts from the first scenes, in which we see the protagonist with...