The women, when married, wear their hair erected into a horn, which sticks out from the side of the head; but as soon as they have children the horn is erected straight up from the top. They are very shy people, but as I was anxious to get a sketch of a woman, I got the missionary to persuade her to sing while I made a few notes. She was dressed in a pretty red and blue garment, with a large felt cape over it, and wore a full short petticoat of blue and white.

Both men and women wear gaiters and loose leather boots, and the men’s sleeves are looped up in a picturesque way as in the accompanying sketch. The women carry their babies slung on their backs. 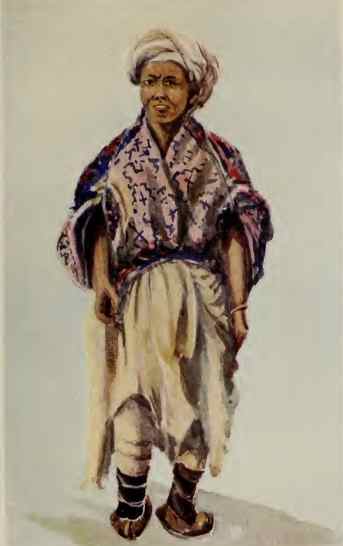 A race of the Manzas

A member of the mission described to us a curious race that takes place in Bábú land where the  Manzas live, but which had never been visited before  by European women. The course is strewn with the  feathers of fowls, and the men wear very full, short,  circular dark capes, and a sort of crest on their heads.  Then they put their ponies at full gallop, and extend  their arms so that they look like eagles with extended  wings as they sweep round the course ventre a terre  enveloped in a cloud of feathers and dust. Some of  the tribes are very wild ; not infrequently the Lolos or Ibien, as they prefer to be called, kidnap the Chinese  and make them pay a heavy ransom, so that little  towers of refuge are built in this district.

The number of these aboriginal tribes is probably unknown  to any one; we always heard conflicting accounts of  them, and until recently no systematic attempt has  been made to approach them. Hosie describes how  difficult it was even to catch a glimpse of any of them  when they were close beside the road, as they lurk in  the bushes to try and see others, themselves unseen.