In Brief: One of Yunnan’s most important cultural heritages destroyed by political fundamentalism, a thought-provoking visit.

On the outskirts of Kunming, the capital of Yunnan, near the city of Anning, there are some curious Buddhist grottoes.  They belonged to the ancient Fahua Temple, and today they are rarely visited because the head sculptures were smashed during the Cultural Revolution.

On the way to the Fahua Temple from Anning you first drive along a highway that you think cannot lead to an ancient place, but the car suddenly takes an almost imperceptible detour, goes through a village, starts climbing up the side of a mountain, and in a couple of minutes you are at the gate of the Fahua Temple Grottoes.

The temple disappeared centuries ago. Before our eyes is a rocky mountain with Chinese-style roofs at its feet and lush vegetation around it.  The caves are arranged to the left (the first three) and to the right (the last one) of the parking lot.  The climb to the first is easy, to the second, without being dangerous, you have to be careful if the ground is wet.

In the first cave, the leftmost, there are two sculptures of Guanyin (on the right) and Dizang (left). Guanyin, 1.30 m, with feet bent in meditation, is elevated on a lotus throne. She wears a wreath of flowers and the body covered with a kasaya (Buddhist habit), her image of holiness is shown by her double mandorla. Dizang is 2.89 meters tall. He carries in his left hand a Mani ball, and in his right hand a victory flag. The left foot bent, the right foot hangs down to the lotus ground. The two deities in this composition exert a complementary action, for while Guanyin is the goddess of mercy who offers all her gifts to whoever prays to her or pronounces her name, Dizang, by her role in favor of the believers during the trial after death, is in a way the compassionate deity in those moments.

Next is the grotto of the Ahrats. The Buddhist saints are arranged in three unequal rows on the cliff wall, above 9, in the center 6, and below, 3 sculptures. Each of them has a name among Buddhists: «The one who rides a deer», «the one who likes to feast», «the one with the abundant tale», etc. They were historical characters, originally the 16 arhats (or luohan) who came from India, but since the end of the Tang dynasty in China, 18 arhats are venerated.

The third cave is that of Sakyamuni and the shepherdess who offers him milk.  This cave, with Sakyamuni in a strange posture, illustrates the story of «the shepherdess offering milk to Buddha». For it is said that when Buddha was practicing early asceticism in a forest, following a heretical sect, he nearly starved to death, but fortunately survived because a shepherdess offered him milk. 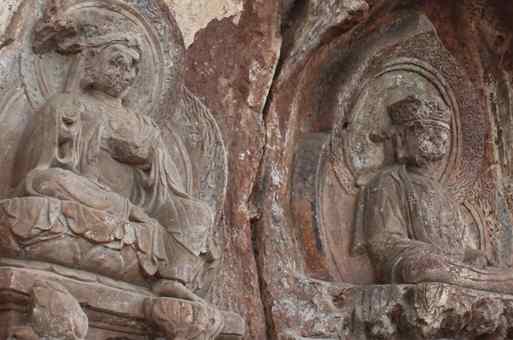 Going to the right, with 4.9 meters long and 1.9 meters high, Sakyamuni reaching nirvana is the most spectacular statue of this ensemble. In spite of the destructions, the sculpture still gives off a peace that not even the pickaxes of the iconoclasts have been able to violate. The hand resting on her head and a stone as a pillow, he wears a Buddhist kasaya with a bare chest. It is still today one of the most beautiful sculptures of Yunnan at the time.

Near Sakyamuni there is also a calligraphy of Yu, which is said to be from the hand of that legendary emperor (about 2,000 B.C.E.) but logically it is not his as writing did not yet exist in his time.

Every day, when the sun sets over Luoyang Hill, its rays dye the Buddhist images, which is called the «night glow» of these figures, which became famous in dynastic times as one of the 8 views of Anning.

The arrangement of the figures suggests that an attempt has been made to recreate the structure of a temple on the mountain itself, with Dizang and Guanyin at the front, as happens in many temples, the 18 ahrats on the side walls of the first hall, behind them is Sakyamuni in a really strange pose, and at the end of it the main hall with the Buddha reaching Nirvana.