In short: A fully preserved Qing dynasty-style city, with some older buildings, surrounded by a complete city wall, and interesting temples in its neighborhood.

Pingyao is one of the best-preserved cities in northern China, possibly the only one that completely preserves not only the original wall, but the structure of its neighborhoods, streets, and houses has also been maintained in its traditional form, the architecture of the Ming and Qing dynasties. In all, 3,797 dwellings are preserved within the city walls, many of them, houses with rectangular courtyards and the mansions of the potentates, with a pair of stone lions before their doors and carved bricks on the lintels.

Located in the little-visited Shanxi Province, just over 100 kilometers from the provincial capital, Taiyuan, and little known until a few years ago, it was spared the first wave of tourist development that has caused so much damage to other places of historical interest. In Pingyao, one can still see what the typical layout of a city in classical China was like. All its streets are located at right angles, parallel to one of the four main streets, which, from the center of the city go out to the four cardinal points. The most important, the south street, is its main axis and was designed symmetrically with Taoist temples and civilian offices to the east and Buddhist monasteries and military offices to the west.

The whole city is a monument, and any stroll through it makes the traveler continually stumble upon buildings of historical value, most of them well restored and open to the public, such as the Drum Tower, the Yamen Palace, the Temple of Confucius, and so on. None of them manages, however, to steal the limelight from the street.

It was built in 1370, completely surrounds the city, is 10 m high, and measures more than 6 km. It has six gates, one to the north, one to the south, and two to the east and west. It is punctuated by 72 watchtowers and 3,000 battlements, said to be a tribute to the 72 main disciples of Confucius and his 3,000 students.

The Rishengchang Piaohao was the first bank in China and was founded in Pingyao in 1824. This bank soon spread its activities throughout the country, making large profits in its domestic and international operations. Encouraged by its success, other banks were established in Pingyao, making the city the financial center of China, the reason why the city has so many stately mansions. It is now a museum that explains the workings of these financial institutions in the 19th century. 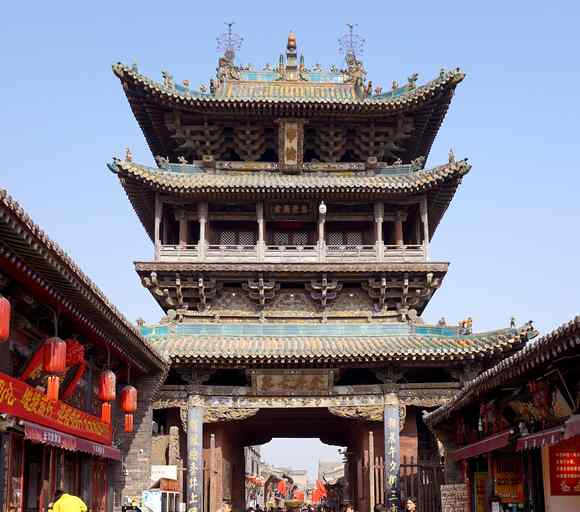 Located in Qiaotou village, six kilometers from Pingyao, it is called the «museum of ancient painted sculptures», as it houses more than 2,000 colored sculptures from the Song, Yuan, Ming and Qing dynasties. The temple is even older, said to have been founded in the 6th century, and its name Shuanglin, double forest, refers to the Buddhist legend that Sakyamuni, founder of Buddhism, attained nirvana under two trees. The Hall of the Thousand Buddhas is dedicated to the goddess Guanyin, who appears surrounded by clay sculptures of the 500 Arhats, each on his vehicle.

12 km from Pingyao, was built in the 10th century and renovated in 1816. Its Hall of Ten Thousand Buddhas is one of the oldest wooden structures in China and one of the best preserved. Inside are beautiful sculptures of colored clay, in some of them one can still distinguish the original color. Among them are eleven sculptures belonging to the Five Dynasties (10th century) and a seated sculpture of Sakyamuni. To protect the Hall of Ten Thousand Buddhas, when it was built, a type of eaves much longer and wider than the hall was adopted, supported by wooden knots called «Dougong».

If you are thinking of traveling to China, contact us. We can make of your holidays the best travel of your life.