220 kilometers southeast of Kunming is one of the oldest cities in Yunnan. In imperial times it was the main administrative center for the entire eastern and southern part of the province, today it has a small modern urban center and next to it an ancient city of considerable size. This consists of a network of narrow and quiet streets, in which there are buildings inherited from the past in different states of preservation. Since many old streets, neighborhoods and buildings are being restored in recent years, a visit to Jianshui is a must, and it has a limited number of tourists. A stroll through the ancient city always provides pleasant surprises, besides Jianshui is a good stop on the way to Vietnam or the Yuanyang Terraces.

Jianshui may already have been home to a kingdom of some importance at the beginning of our era, and is known to have been the regional capital with the Nanzhao Kingdom. The Mongols of the Yuan dynasty confirmed its importance, later maintained during the Ming and Qing dynasties, when Jianshui was one of the main administrative centers of Yunnan. In the 20th century, however, it became less important, which is why so many relics of the past have been preserved.

The ancient city is huge. It stretches on both sides of the Dawn Gate (Chaoyang men 朝阳门). If one heads west, that is, in the direction of the pedestrian street, one finds the main monuments, as well as dozens of old houses, some of them restaurants or hotels, ending at the West Gate. If you go towards the eastern side, you can also discover charming environments, some of them recently restored.

The main street is Linan Street, the old name of this city. Inside there are hundreds of old houses and several dozen temples and memorial buildings, only some of them restored. The most famous are the house of the Zhu family and the Temple of Confucius, but between those that have been recently restored, those that are partially preserved, such as the Zhilin Si Temple, and those that languish deteriorating in the middle of lonely alleys, the city is a box of surprises full of treasures for lovers of ancient culture, and possibly one of the privileged places for the study of the ancient traditions of China. A discerning traveler would probably spend several days to make a fairly complete exploration of ancient Jianshui, being important to note that there are also temples outside that area. 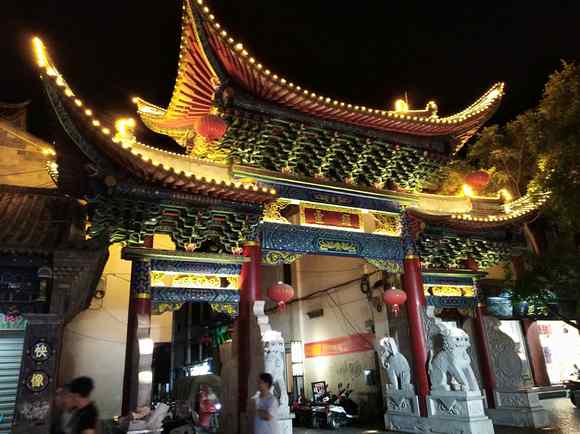 As an orientation for those who decide to undertake it is to note that north of Linan Street are concentrated the most famous and best preserved monuments, to the south opens a network of narrow streets, usually lonely, much less lively than the north, full of surprises. The result is sometimes only an abandoned pagoda, like the one seen from the Gate of Dawn, a spectacularly engraved gate, like that of the Zhiling Temple, or a corner lost in the night of time, like the Wumiao, or the Military Temple, west of the Confucius Temple, abandoned, of which only a couple of porticoes remain, the second of them in an unstable balance that seems ready to fall at any moment, and a room used as a warehouse. Nevertheless, a visit will give an idea of the state in which some of the monuments were left before being restored to attract tourists.

The surprises may continue beyond the so-called «old city», for outside its ancient walls, there remain neighborhoods of considerable size, with temples and mansions almost in ruins, majestic gates that may fall down at any time, and other vestiges of Jianshui’s past life.

It was built by Zhu Weiqing and his brothers in the late Qing Dynasty. It occupies a total of 20,000 square meters with a so-called «four vertical and three horizontal lines» design that prizes symmetry and harmony. It actually shows the exasperating monotony of the Confucian ideal, as almost all the buildings are the same, and are arranged along a larger courtyard and other smaller ones, which in turn leave space for a total of 42 courtyards and 214 rooms of different sizes. That is why it is known as the Southern Yunnan Grand View Garden in honor of the novel The Dream of the Red Mansions. Perfectly preserved, it opens to visitors with a series of courtyards dividing the original rooms of the house. Its doors are carved with great skill, the colorful figures are difficult to see in other latitudes. The decoration of doors and beams is outstanding, some of the most elegant that can be seen today in Yunnan.

Half of the house is composed of the rooms where the members of the Zhu family lived, forming a series of identical courtyards. The other half is composed of the common spaces, with a small garden, the ancestral temple, a small pond and a theater stage. I suggest going to the right after the entrance and seeing the rooms first, almost all with the same recent decoration, and then going out towards the garden part, where the buildings with the most elaborate latticework and the most beautifully decorated doors are located. Then a corridor usually with plants leads to the back of the ancestral temple, with two large longevity characters (寿), and lattices between them. From the entrance you can see a large elaborate wooden ancestral tablet. And on the other side the pond and the stage.

Turning to the left there are some courtyards that lead directly towards the exit. At the end of 2017 they have opened the communication of this house with a large modern park with a lake in the center. This is a unique opportunity for the traveler to get to know during their trip to Yunnan the style of typical Yangtze Delta gardens, so it will be a great ending to the visit to the Zhu family garden.

Built in 1285, as soon as Jianshui began to gain importance as a regional administrative center, it occupies a total of 7.6 hectares. It is a quiet and interesting place, possibly overgrown, for it has been rebuilt and enlarged numerous times, the last leaving a huge square before its gate. Its construction was modeled after the Confucius Temple in Qufu, the sage’s hometown. Along a north-south axis of more than 600 meters the buildings are aligned in perfect symmetry. In total there are 31 buildings along this axis.

The entrance is a double door that is actually a side door, so that after crossing them one must turn left immediately to start the visit in all its sense. This leads to a courtyard with three majestic doors and a wall that connects them with an auspicious inscription. Behind is a large pond, where you can stroll if you have time. Moving on from the gate with the calligraphy, actually the gate of Confucius and Mencius, the two leading philosophers of the Confucian tradition, one arrives at a junction with two huge gates on either side, Further on is the Altar of the Apricots (杏坛), with a tombstone in the center and 16 columns with carved dragons. Further on the Gate of the Great Acquisitions, with marble columns with carved dragons at the door, and a number of sculptures with the demons and saints of Chinese tradition, inside. And behind it, the Hall of the Ancestral Masters, where officials and aspirants made offerings to Confucius and other saints of this tradition. This is the largest hall and the one with the most decorated ceiling. Inside there is a sculpture of Confucius, on its sides others of the four masters (two on each side), and already on the wall another twelve important Confucian masters (six on each side).

That should be the end of the visit. However, there are other rooms behind with little interest. Such as the Ancestral Temple for Sacrificial Ceremonies, with a series of ancestral tablets. Especially five on which the last five ancestors of the Confucian clan were worshipped. For until the end of the imperial era the members of the Kong family, descendants of the master, enjoyed a unique social position. Other tablets are those of the fathers of the main Confucian philosophers.

It is the one that gives entrance to the ancient city as such. Generally one can climb it and enjoy a beautiful panoramic view. At its foot there is a small park always lively with local people. Outside the gate there are some narrow streets with a certain charm, among which it is not difficult to find mansions almost in ruins and temples that retain their secular cults, and a large artificial lake that completely changes the layout of the city.

The Chongwen pagoda, visible from the tower, is reached by the little street that runs parallel to Chaoyang nan lu, from which one can see behind a gate the yellow walls of an abandoned temple.

From the Yuan dynasty, it has one of the best sets of wooden latticework in southern China. It only preserves a portico and one of its halls, but the portico has some impressive sculptures, difficult to see elsewhere. The hall is decorated with a beautiful coffered ceiling and next to it are preserved some huge stones with inscriptions. 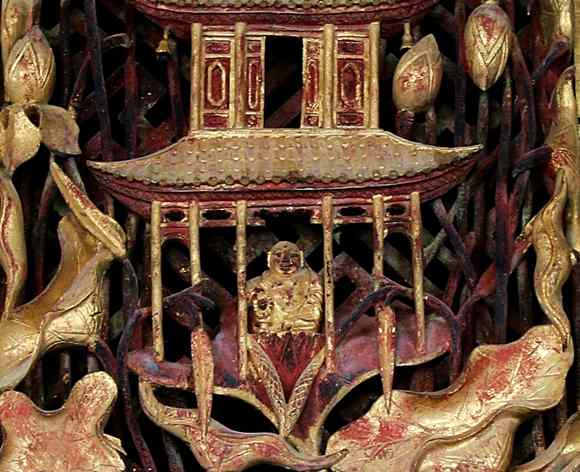 The best excursions from Jianshui