After visiting the Yunnan Provincial Museum, with its exuberance of images of tigers and bulls I strolled around in Guandu Old City. The streets were full of people and I entered the Fading Temple to enjoy the quietness of the sacred place. And then, walking along its halls and pavilions, I noticed that there are altogether 4 tigers in the temple decoration, and most of them in iconographic menus that are not usual.

The first one was in the knee-pad of one of the Four Heavenly Kings.

The second (main picture) one appeared in a wall, it was the mount of a bodhisattva, and was opposed by another bodhisattva riding a dragon. As there are some bodhisattvas usually depicted riding a tiger, its presence  was not surprising. And to have a tiger and a dragon painting at the gate of a hall, is a very common protection to Chinese buildings.

The third one appeared in a depiction of the Buddhist hells. Though the tiger is one of the lords of the death and transformation, is rarely seen punishing the sinners in the hell.

The fourth one is a beautiful tiger painted in a wall, without any other text or personage.

Fading Temple, located in the west side of Luofeng Village, Guandu Old City, Kunming and originally erected in the Song Dynasty (960-1276), underwent several rebuilding and the existing main hall was constructed in the early Qing Dynasty. It covers an area of about 2,246 square meters, consisting of the main Hall, the side halls and the wing rooms with three Gates. The side halls and the wing rooms constitute the front and back courtyard. 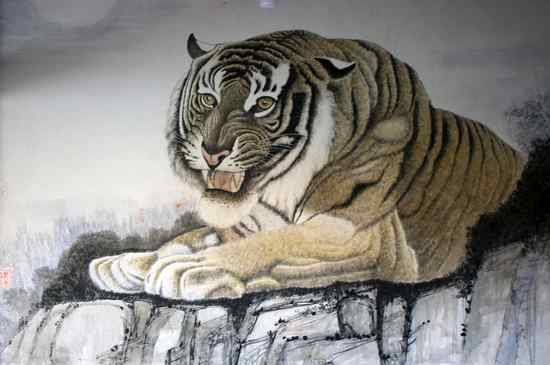 Characterized by a gable and hip roof with single eave, the main hall building is in moderate scale but the roof is high-pitched, the highlight of the house, as a column-and-tie wooden structure, is that the bracket set has a 45-degre-angled wing, bracket arm. The frontal exterior finish work is in ornate decoration, the eave in the central bay room has carved on it a vivid phoenix-shaped creature, the pillar head of the gable is built with bricks to form brackets in the style of Qing Dynasty.

To cite this post: Ceinos-Arcones, Pedro, "What are four tigers doing in a Chinese Buddhist Temple?," in Ethnic China, 11 marzo 2021, https://ethnic-china.com/what-are-four-tigers-doing-in-a-chinese-buddhist-temple/.