Shanghai, with more than 18 million inhabitants, is one of China’s most populous cities and the country’s economic, financial and industrial center. This is partly due to its strategic location, as it is the natural gateway to the sea for the rich provinces of Jiangsu and Zhejiang, where more than 120 million people live, and partly due to its recent history, as since the end of the Opium War it has become the main hub of interaction between Chinese and foreigners.

Shanghai is China’s city par excellence, the place where the vices and virtues of a city are concentrated. Its chaotic traffic, its incessant activity, its streets crowded with strangers and citizens, its neighborhoods and buildings in which history has left its mark, give it a unique air. Shanghai is the great mythical city of Asia. A world that is many worlds, each one more fascinating. A crossroads of trends, industries and ideas, it is the crucible in which China searches for itself to project itself into the future with its own style.

Shanghai, in that eternal contradiction between tradition and modernity, localist and cosmopolitan trends, is the paradigm that reflects the current search for a Chinese soul in a modern world. In Shanghai, travelers from any country can feel at home, but they will never forget that they are in the Far East. Although Shanghai is a city to stroll around, to forget oneself in its various environments, there is no doubt that it needs to have some landmarks: its most important monuments.

It is the center of old Shanghai, of the ancient city surrounded by the city wall. Built in the 16th century, by Pan Yunduan, a wealthy official, its history has been quite eventful. The Pan family went bankrupt, the garden was abandoned. In 1760 it was restored by a group of merchants. It was razed by the British soon after. It was a bazaar during the first half of the 20th century, to be restored again in 1957. In only 2 hectares it concentrates the fundamental elements of Chinese gardening, creating an enclosure that opens to the visitor a hundred landscapes and a thousand scenes. Zigzagging paths, small walls, use of exterior elements, doors with whimsical shapes. With each step changes the view of the visitor. The Yuyuan Garden is the private garden in which vegetation has been best combined with pavilions, stones and ponds. On sunny days its rocks, waters and pavilions take on a spectacular color.

This is the most famous temple in Shanghai.Given the scarcity of temples in Shanghai, it is common to find religious ceremonies during the visit, from the simple ceremonies in honor of the deceased, that relatives perform with a certain periodicity, to the more complex celebrated according to the Buddhist calendar. It was built in the early twentieth century to house the two white jade Buddha statues, brought from Burma by the monk Hui Gen. Its main attraction is precisely these statues. The layout of the temple is classical, although the entire enclosure has been recently renovated with a modern and grandiose iconographic ensemble. The Jade Buddha is housed in a building at the back, a little distant from the other halls of the temple. 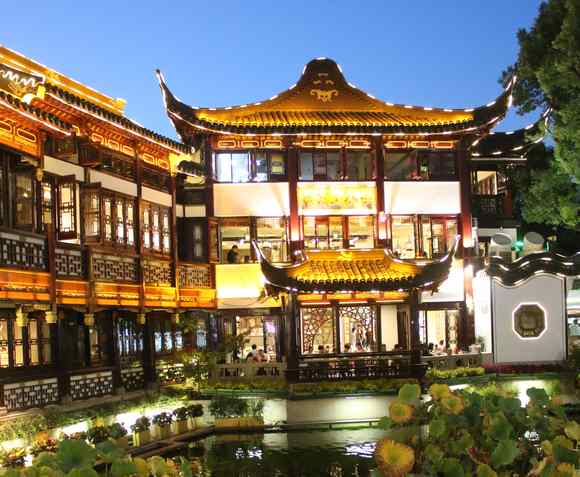 The area where the British settled after the Opium War is called the Bund. Since the Chinese lived in the old, walled city, the British took a stretch of the riverbank north of them for their trading activities. As Shanghai’s commercial and industrial role developed, the Bund gained in importance, and during the first half of the 20th century it was here that the city’s most emblematic buildings were constructed. A city where the Chinese were second-class citizens. The most interesting buildings are the Hong Kong and Shanghai Bank. When it was built, it was said to be the best building east of the Suez Canal. The Dongfeng Hotel: Formerly called Shanghai Club. Peace Hotel: Formerly called the Cathay Hotel. It extends on the two corners of Nanjing Street and the Malecon. The South building, dating from 1906, is the oldest building on this street. The North building, with a pyramidal green roof, the tallest.

In the early 1990s, when Shanghai was about to embark on the road to modernization with all its might, the authorities realized that the shortage of land could be a drawback to its development. So they decided to create a new city east of the Huangpu River, where there were only a few peasants’ houses and a few blocks of workers’ housing. That city is the district of Pudong (East of the river), which has since completely changed the landscape of Shanghai. Built according to modern and rational urban plans, the genesis of which can be seen in the City Exhibition Museum, it combines commercial, residential and recreational buildings in an orderly fashion. And although, the most striking are the large office towers, the parks and museums that are being erected, will compete with the former in quality and design. At present, the following stand out:

Shanghai Tower. The tallest building in China with 632 meters and an original shape. Finished in 2015.

Shanghai World Financial Center. With 492 m, it was finished in 2009 after a process of almost 20 years of design and redesign.

Jinmao Building. With its 88 floors and 421 m, and its pagoda-shaped top, it combines classical Chinese style with the atomic era.

Pearl of the Orient Television Tower With 470 meters, it has an original design that gives it, in addition to its magnificence, a high aesthetic level.

During colonial times the square was a racecourse, replaced during the communist years by a dingy bus station serving the people.

The Shanghai Museum, south of the square, shaped like a pot, is the city’s finest museum. Its 10,000 m2 of exhibits include the most important Chinese art divided into 11 categories: bronze, ceramics, painting, calligraphy, sculpture, furniture, jade, seals, coins, minority art, Zande Lou pottery. It also has several rooms for temporary exhibitions. Its collections of bronze, ceramics and painting are the most remarkable, but the whole museum, in my opinion, is the one that is installed with more care and allows a better appreciation, aesthetic and chronological of the exhibits.In front of the Museum is the Grand Theater, with 1800 seats, finished in 1998.  It has the largest stage in Asia, with 718 m2, and is an architectural masterpiece. The visit is guided. East of the Theater is the City Exhibition Museum, very interesting for those who want to know the Shanghai of the past and the future. Behind the Theater a building of the colonial era, is the Shanghai Museum of Modern Art, with good exhibitions. A quite interesting panorama of the square and the nearby streets can be enjoyed from the cafeteria of the JW Marriot Hotel, in its northwest corner.

If you are thinking of traveling to China, contact us. We can make of your holidays the best travel of your life.

The heroine of the Li family – A Chinese tale

The heroine of the Li family The humid lowlands north of Mount Yong were once occupied by a gigantic python about three feet thick and 70 or 80 feet long. Its presence scared away the natives from the vicinity and caused unexpected deaths among local functionaries....

The hound as go between – A Chinese mysterious tale

The hound as go-between - A Chinese mysterious tale During the Han dynasty, Huang Yuan of the principality of Taishan opened his gate one morning to find a black hound sitting outside keeping watch, as if it belonged to the house. Huang fastened it to a lead and took...

The Spirits are drunk. Comparative approaches to Chinese religion

Paper, Jordan. The Spirits are drunk. Comparative approaches to Chinese religion. SUNY Press. 1995 This is a completely original book on the religions of China. Instead of following the repetitive mantra of the existence of three religions and describing them more or...