In short: A wonderful city that no one can miss. The heart of a unique culture in the world, and the artistic stage where the religious experiences of thousands of pilgrims take place.

«When one visits Lhasa, one is only thinking of coming back».

This is a famous saying among Tibetans and a reality experienced by every traveler who visits this city. And the more times one visits it, the longer each visit lasts, the more one gets to know it, the more one thinks of returning to Lhasa.  Lhasa is a unique city on our planet, a place where geographical, historical and religious conditions have created a world apart, where the conceptions on which we base our daily lives are continually challenged. A world where happiness, comfort and wealth take on a completely different value than usual.

Lhasa has a number of qualities that contribute to making it an exceptional place: its high altitude, possibly having been the highest capital of a powerful empire; the continuous presence of the high mountains surrounding the city, a constant reminder that we are in the very heart of the Himalayas; its fascinating culture, exemplified mainly in its magnificent palaces and monasteries, but which also permeates the traveler’s days through that myriad of almost hidden temples or the original reproductions of tankas and art objects offered in the stores.

The last component, and perhaps the one that makes the most lasting impression, is the human factor, for not only is Lhasa populated by one of the friendliest peoples in the world, who respond with joy to any effort to communicate on the part of the traveler, but its most central streets, those that devotees travel on their pilgrimages, are an authentic ethnographic museum, where the traveler can interact with people from all corners of the roof of the world. Nomadic shepherds from the north, Khampas warriors from Sichuan, monks from remote places, all tirelessly walk along Barkor Street and will warmly exchange a smile or a handshake with the traveler who pays attention to them.

Lhasa is the center of a country that is really a world, and the journey to Lhasa a spiritual experience that no traveler can refuse.

The ancient city of Lhasa is the streets around the Jokhang Temple and Barkor Street. It is a somewhat irregular rectangle containing dozens of ancient temples and mansions, plus the market, a multitude of restaurants and traditional stores, and some small hotels opened in old Tibetan mansions providing, in short, the best sample of Tibetan life that the traveler will know. Some of these streets are lined on both sides with impressive buildings with high white walls, beautifully decorated doors and a typical Tibetan finish.

Jokhang Temple is the most important temple in Lhasa and in all of Tibet. The city of Lhasa was in fact formed around this temple, its name «holy land» was also given by the temple. Its importance is given by housing a statue of Buddha Sakyamuni Buddha when he was 12 years old, brought to Tibet by the Chinese princess Wen Cheng. It is a small temple, with a simple and unsophisticated structure that reflects its ancient origin, which houses some of the most valuable relics of the Tibetan religion, as the paintings and sculptures preserved inside are among the best and oldest in Tibet, and the most revered by the faithful.

The Potala Palace is the most impressive building in Tibet and one of the grandest in the world. It is also the highest palace. Since its construction it was the political and religious center of Tibet, and is still today an important pilgrimage center for Tibetans, and for foreigners eager to discover its most important building. The Potala Palace, with its labyrinth of halls and pavilions, is an entire city, with numerous government halls, chapels, tombs, as well as schools, prisons and warehouses. The dimensions of the palace are staggering: 117 meters high on 13 floors, 400 meters wide (east-west) and 350 meters deep (north-south). For the quantity and quality of the works of art it preserves, it could be considered one of the best museums in the world: a museum of Tibetan art and culture.

It consists of two distinct parts: the Red Potala and the White Potala. The name comes from the color of the exterior walls. These colors, plus the gold that crowns the ceilings of the funerary chapels, contribute to the splendor that shows from afar. 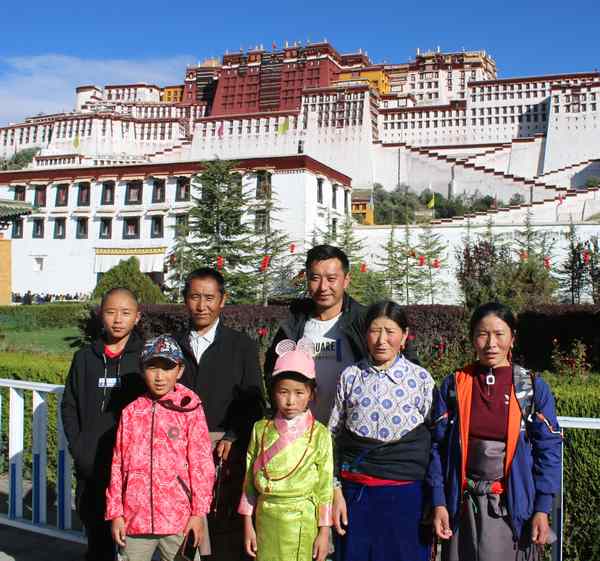 Drepung combines a series of qualities that make it special: it has about one hundred rooms, six of which can be considered among the most beautiful manifestations of universal art. It is visited by numerous pilgrims, who go through the halls and courtyards presenting offerings to their deities. It is not visited by as many tourists as the Potala Palace or Jokhang, which makes it can be seen quite calmly, stopping at the details that arouse interest in its magnificent decoration or in the activities of the believers. In addition its main halls are open allowing to know their best works. Its name is due to the fact that from afar it looks like a pile of rice, so it was called «Rice Gathering Monastery» (Drepung Gompa) in Tibetan.

Drepung was founded in 1416 by Jamyang Choeje, one of the three main disciples of Tsongkhapa. It soon became an entire monastic city formed around four large Buddhist universities (dratsang) that functioned semi-autonomously. The erudition of its lamas gave Drepung a great influence on government policies.

3 km north of the city, the Sera Monastery complex of buildings appears imposing from the road. Built on the Serawoze mountain, it looks like the guardian of Lhasa. Sera is another of the great temples of the Gelugpa school. Founded in 1419 by Shakya Yeshe, one of the first three disciples of Tsongkhapa, its name was given by the abundance of roses (sera in Tibetan) in it. Its importance grew over the years, becoming an important educational center, with the Serame and Seraje Colleges, dedicated to logic and dialectics, and the Tantric College, for the teaching of esoteric Buddhism.

If you are thinking of traveling to China or Tibet, contact us. We can make of your holidays the best travel of your life.