The Kyzil Grottoes – Primitive Buddhist art on the Silk Road

The Kizil Grottoes are located on the cliffs of Minya Dag Mountain facing the Muzhati River, 7 km southeast of Kizil Township, Baicheng County, and about forty-three kilometers west of present-day Kucha, Xinjiang Uygur Autonomous Region. There is a large ditch between the water-filled Minya Dag Mountain that in front of the grottoes forms a fan-shaped oasis filled with acacia, poplar, and fruit trees. The general direction of the grottoes is from east to west and extends for about 3 kilometers. There are 236 numbered caves, with almost 10,000 square meters of preserved mural surface. Of these, some 135 are still relatively intact. It is one of the most important monuments of Xinjiang and the Silk Road.

The earliest Kizil Grottoes were built around the 3rd century A.D. and the latest around the 8th century A.D. They are the first large grotto complex in China. The Kizil Grottoes are also the largest grottoes, with the largest area of preserved murals. They show the entire process of creation, development, prosperity, and decline of the Grottoes from the 3rd to the 9th century A.D. They also provide rich evidence of specific historical processes, cultural traditions, religious art, ethnic folklore, and the development and evolution of music and dance.

In particular, it provides important information from sites, scattered in a desert area of the Xinjiang region, that played an essential role in the transmission of Buddhism from India to East Asia. Among them, Kizil stands out for its size and abundant murals, which provide invaluable information about the culture of the Kucha Kingdom, an important center of Buddhist culture from the 3rd to the 7th century. Centuries later, the cave temples were abandoned and their artistic content was forgotten.

Since they were built, the caves have suffered successive deteriorations, some caused by natural phenomena and others by the hand of man.  The sculptures that survive are scarce, while the most numerous and well-preserved murals have become the most precious relics. Its most important aggression was when the German expeditions of Le Coq and Grunwedel took hundreds of wall paintings to Germany, some of them later sold on the international market.

The Kizil caves served as Buddhist temples and as monks’ domiciles. The simpler, usually one-room caves were used as monks’ residences and were not decorated. Larger ones, with a square chamber may have been used for communal religious activities, in which some eminent monks would expound aspects of Buddhist doctrine. Many of these were furnished with altars and decorated with statues and murals. 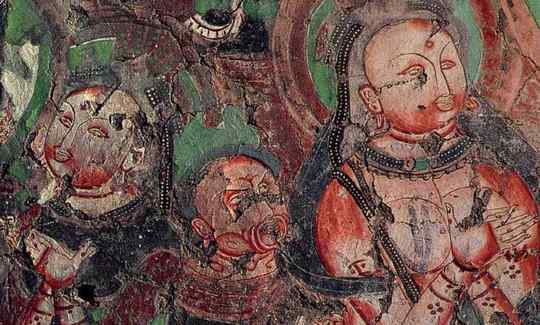 The larger caves, with a large square pillar in the center of the main chamber, were used for liturgical purposes. Most of these share a similar iconography and layout, with a large niche for a statue at the front of the pillar, and a mural depicting Buddha preaching. The side walls were usually covered with preaching scenes, and the ceiling with episodes from the jātaka (accounts of Buddha’s previous lives). The back wall, decorated with a nirvāṇa scene, featured a painted or sculpted image of the reclining Buddha. The side aisles and entrance wall of the cave were also painted.