In the character pi 皮, which means skin, one can still discover a hand flaying a skin. The character fu 肤, however, is a simplified character, showing us the radical of the different organs of the body 月 on the left, and that of husband 夫 on the right, which indicates its sound.

Its sense, apparently absurd, gradually takes on meaning when we examine the original character 膚, which is composed of the radical for tiger 虎 that would give it the sound, and the character for stomach 胃, which is generally interpreted as «To cut flesh; to skin, flay – the tiger’s stomach: to dismember (to cut the flesh)» Karlgren. 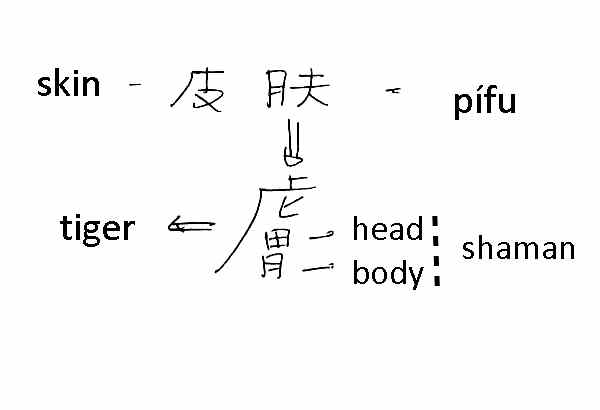 At that time the shamans were of great importance in society, perhaps sometimes even leading it, and they certainly played a decisive role in the divination ceremonies in which the Chinese characters were originally used. In many of their ceremonies these shamans were attired with the skins of some animals, as can be discovered in the bronzes of the time, especially with the skin of the tiger, under which it was supposed they could perform their shamanic journeys and put themselves in communication with the ancestral spirits and those of nature.

Since the part under the tiger, which Karlgren claims is the character for stomach, is actually composed in turn of two parts, the upper one 田, which usually means field, is used in some characters as a pictogram of the head, as in 思,  细, and more, and the lower one which we have already said means body 月 or one of its organs. The head and body describe a person, whom we see placed under a tiger, or rather, and being faithful to that graphism, inside a tiger, which is a faithful description of those rituals in which the shaman was placed under the skin of the tiger. Interpretation that seems adequate considering that the origin of the characters is located in the religious ceremonies of the Shang.

To cite this post: Ceinos-Arcones, Pedro, "Discovering the tiger and the shaman in Chinese characters.," in Ethnic China, 10 abril 2021, https://ethnic-china.com/discovering-the-tiger-and-the-shaman-in-chinese-characters/.