One of the most difficult aspects of Chinese is to learn is the so-called idioms or chengyu (成语). In general, they refer to short sentences composed of four characters that allude to some historical fact or literary anecdote from ancient times. Its difficulty lies in the fact that one must not only be familiar not only with the specific fact that gives rise to the idiom, but with the actual construction of the idiom. Needless to say, this aspect of their language is a headache for Chinese students themselves, and it is only through the slow patience of their teachers and the help of idiom dictionaries, some thousands of pages long, that students become familiar with the most common idioms.

To help foreigners in their study of the Chinese language, local publishers often publish bilingual booklets telling the history or anecdotes of some of the most common idioms. A few days ago, «100 Chinese Idioms and Their Stories» fell through my hands, from which I extract for readers some of these idioms.

牛角挂书- niujiaoguashu. To hang a book on a cow’s horn is to praise a person for studying hard. It refers to a young man, who being dismissed from imperial service at the end of the Sui dynasty (581-618), did not abandon his love of study. One day, when he was returning home with «The History of Han» hanging on the horn of his ox, he was discovered by a great minister, who from then on sought his friendship, making him achieve great accomplishments.

破镜重员- pojingzhongyuan. A broken mirror again round. Refers to a separated marriage can be reunited again as a broken mirror can come to be mended. It refers to a young married couple living in the years before the founding of the Sui dynasty, who fear that wars and other calamities will separate them. The wife breaks a mirror, and says to her husband. «We will each keep half a mirror and if one day we are separated she will use it to look for the other at the lantern party. They are indeed separated and she becomes a concubine of a great minister. When the feast of the lanterns arrives, he goes through the streets of the capital trying to sell his half mirror for a high price. The strangeness of this case, someone wanting to sell a broken mirror very dearly, causes it to reach the woman’s ears and ultimately leads to them managing to reunite.

塞翁失马 – saiwengshima. The old guard loses his horse. It is often said next «and how do you know it was not a blessing?» For it implies that often temporary sufferings can bring some advantage in the future. It exemplifies in a practical sense the idea of yin-yang among the Chinese. He tells that long ago there lived on the frontier a guard who had a fine mare. One day the mare ran away, and no matter how hard he looked for her he could not find her. His neighbors went to console him in sorrow, but he, resigned, replied that we never know if a misfortune will herald happiness. In fact, a few days later the mare returned, bringing with her a magnificent horse. This time his neighbors came to congratulate him, but he did not attach much importance to the matter either.  Not much time had passed when his only son, riding the new horse, suffered an accident and became lame. Again the neighbors came to console him, this time without the guard feeling particularly sorry. Indeed, not many months had passed when war broke out again and all the young men were called up. The guard’s son, being lame, was released from the levy. In the battles that followed many of the young men of the neighborhood lost their lives at the hands of the enemy. Among them, of course, was not the son of the old border guard. 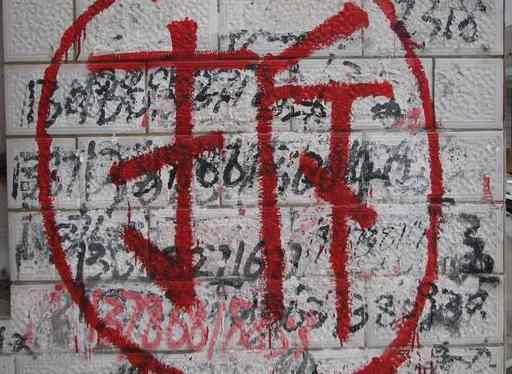 Rebirth. Yes, many of these axe-marked projects are houses that reflect a simple, sometimes Spartan way of life that we foreigners have grown accustomed to seeing as part of a familiar landscape. For many families, the chai character on the door of their walls means that they will finally leave their rudimentary dwellings to participate, for once, in the progress that is spreading throughout the country. For others, it means that the hammer of speculators will strike their lives.

The eternal cycle of yin and yang. To die and to be reborn, are currently conjugated in this curious character.

Pedro Ceinos is the author of Manual de Escritura de los Caracteres Chinos, and other works on China.