The Chinese character to represent the snake has undergone over the centuries a curious evolution that, although seen from the cultural perspective of the XXI century may seem strange, it will not be so much if we remember the symbolism of the snake in the ancient culture of China.

The first representations of this character (the two figures above left) clearly show us the pictogram of a snake, in which the head stands out, and its long body with some sinuosity. Subsequently, its head is emphasized (top right and bottom left), perhaps even with its tongue out. The systematization of the characters presents us again (bottom center) the original snake, even more schematized, but surprisingly we find it under a roof. Finally, when that character was used to represent the pronoun «it», the radical of «bug or insect» was added to form the current character (bottom right).

Anyone who tries to study Chinese characters using logic, as I propose in the Manual of Writing Chinese Characters (1), encounters a cultural barrier that makes it difficult to remember this character, since we can hardly consider appropriate a definition that shows the snake as «snake under a roof». 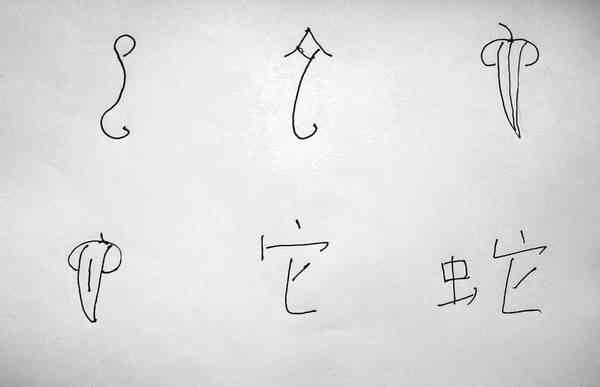 Nowadays, both in China and in the West, the snake is an animal considered dangerous and repugnant, associated with wildlife, which we can hardly imagine under the roof of a house. But this has not always been the case.

Traditionally, the snake has been considered a benign and auspicious animal. Since the ancient Shang dynasty (17th to 12th century B.C.E.), sacrifices were made to a female snake. The most common representations of the great goddess Nuwa, creator of humanity according to some Chinese mythologies, depict her with the body of a woman and the tail of a snake. Fuxi, another of the great gods of Chinese mythology, is also depicted with a snake’s tail. In the tombs of the Han dynasty (202 B.C.E. to 209 C.E.) it is common to find representations of these two deities with their tails intertwined.

The snake, with its ability to change its skin, is considered a symbol of a continuous cycle of rebirth and destruction, which may have served as a relief for the existential anguish of the first human populations. The snake is, moreover, a recurring theme in shamanic cognitive experiences, on which the spiritual life of ancient China was based in a certain way.

The snake is also a feminine symbol. It is precisely this feminine quality that, according to many authors, has caused its symbolic transformation. That is, when women played an important role in society and were considered at least equal to men, the snake, given its extraordinary qualities, was considered a divine animal. As women lost importance, so did the snake, until it ended up degraded to one of the five unclean creatures in the imperial iconography of China.

Fortunately, in those popular traditions generally little attended to by scholars pathologically dependent on written texts, the snake has preserved part of its original character.

Thus, when we learn that in some rural areas of northern Jiangsu province the snake is considered an auspicious animal, they are called «little dragon». And if they find one inside the house, they only take it outside but do not kill it, as they might attract misfortune.

In Fujian, a Snake Temple built during the Ming Dynasty is preserved to this day. Inside, the Snake God and Buddha are worshipped. According to legends, the snake was a boa that came to the area. Soon after an epidemic broke out and killed many people. The people of the village sent emissaries to the mountain where the snake lived to ask for the magic fire, and soon after a ray of light in the shape of a snake appeared and the epidemic ceased. So in gratitude, the temple was built. And every year on the seventh day of the seventh lunar month activities are held in honor of the Snake God. (2)

We are not going to expand on the symbolism of the snake because I believe that these examples are enough to help us understand that remembering the character of the snake as «snake under roof» is simply to remember those not so distant times when the snake was considered an auspicious animal.